I loved the previous books in Kushiel's series. Three years have passed since I read the last one, but it was not hard to remember the characters, the places and the story as I was beggining this one. It is, essentially, a book about coming of age and growing up, with political intrigue, travel, adventure and sensuality. Jacqueline Carey manages, once again, to write a book where you care about every character and relish in meeting again the old characters you love although they are absent in almost half of the book. It seemed nothing relevant was happening, at least nothing important to the great scheme of things.


And hence the 3 stars. Still, I'm looking forward to know what will happen next. Apr 05, Diana Stormblessed rated it it was amazing Shelves: fantasy , series , series-to-finish , adult , read. I love Jacqueline Carey's writing style. What this series needed was a fresh narrator. I love Imri. I can't wait to read more about him. View 1 comment.

Nov 18, Mei rated it really liked it. Another excellent book from Carey.

While not quite as engrossing as the first books, this one is another great read. Hoping for good things in parts 2 and 3. After the Phedre trilogy our dear Jacqueline Carey continues her story with the trilogy of Imriel, the son of Melisande, who has caused so many problems to our heroes so far. Together with the trilogy, we are also changing protagonist and narrator and I can say that we are changing the climate to a great extent.

When he reaches adolescence and the first sexual awakening, this fear becomes more intense and when the time comes to join his country's very sexually-charged society it becomes panic. The dark side of himself is more and more expressed and its culminated with the awareness of the violence of his sexuality; this, together with the news of his mother's escape, makes him very much anxious and leads him on a journey of self-discovery to which he will meet many helpers and many adventures, centered on a fantastic version of Rome.

We also come across the usual elements of the plot that include aristocratic intrigues, dangerous political games, travel to search for revealing information, and more. The problem, however, with this first book is that there is not enough coherence between these elements and history in general. That is, we pass from one stage to another without any obvious connecting element, and the final culmination, although very exciting, is an event completely independent of everything written until then.

I did not like the latter and this somewhat lessened the delight that the otherwise very good book, the beautiful writing, the very interesting characters and the nice game with the real story, gave me.

Of course I am satisfied again, I just wait for something more in the continuation of the story that I think it will be interesting. I always have high expectations for Carey's novels and this one did not disappoint. She has a way with prose that is flowing and delicate without being purple.

Jul 27, Susan rated it liked it Shelves: fantasy. Lord, this is hard. If you're not familiar with Jacqueline Carey and her Kushiel's Legacy series, which is steadily approaching epic proportions The series is filled with everything that makes fantasy so great; an sub-alternate world that parallels our own wonderfully, a great historical feel, well-rounded characters, political intrigue, great scenery, epic travels, wonderful costumes, deep emotions, quests o whic Lord, this is hard.

The series is filled with everything that makes fantasy so great; an sub-alternate world that parallels our own wonderfully, a great historical feel, well-rounded characters, political intrigue, great scenery, epic travels, wonderful costumes, deep emotions, quests o which the fates of nations depend Carey manages to do it all. I've found that, in fantasy, it's easy to overwhelm the reader with all of this, something which Carey luckily doesn't do.

Some have argued that her prose is too description-and-adjective-heavy. I myself disagree and would much prefer descriptive prose to minimalistic prose, at least in fantasy, and even if her sentences sound a little loaded sometimes, for me that just adds to the feel of the book and makes it even easier for myself to lose myself in it. That being said, I have to say that Kushiel's Scion is a lesser sister among its marvelous Kushiel's Legacy siblings.

Most of this has to do with the fact that I am completely utterly in love with Phedre for the uninitiated, Phedre was the narrator and main character of the first three Kushiel's Legacy novels - the next three, of which Kushiel's Scion is the first - are narrated by prince Imriel. Phedre still plays a part, but only a small one. She is my favourite fantasy novel character ever and I deeply regret having to say goodbye to her narrating. But of course, there are many redeeming qualities to Kushiel's Scion as well - Imriel's inner struggle, the lovely, student-y, riot-y vibe of Tiberium, the character of Lucius and his later transformation-and-back into Gallus Tadius I especially loved that , Master Piero and the way he thinks, Canis the mysterious philosopher-beggar And most of all, the thing I've always loved most about Carey's novels; how she makes you care about every single character, because every single character is well-rounded; how every one of them is incredibly human with good and bad in a somewhat equal distribution - how even the smaller side-characters, like the widow Anna or Brigitta or Romuald or Helena feel real to you.

How Carey always makes you feel like behind every story, around every corner, is another story waiting to be told and that the one she tells is only a facet of the full picture, yet an incredibly fulfilling and beautiful facet.

Apr 23, Christina rated it really liked it Shelves: reads , fantasy , reads. I surprisingly enjoyed this much more than I thought I would.

Although not as wonderful as I remember the Phedre trilogy being, this story - in its own right - is just as intriguing. I know many people have complained that it's not what they were expecting, that Imriel isn't as great a narrator as Phedre. Perhaps they are right. I know after I finished Kushiel's Avatar, the thought of reading Scion felt like a betrayal. 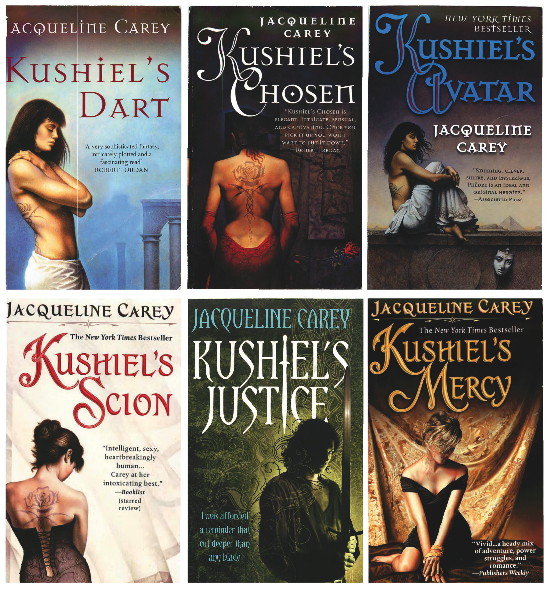 I bought the book, but I couldn't bring myself to actually read it. It took I surprisingly enjoyed this much more than I thought I would. It took over a year 1. I'm glad I waited.

I was able to look at this book in a whole new light, without Phedre's voice in the back of my mind. I think this gave me the advantage of looking at Imriel's voice as his own, rather than a Phedre let down. Definitely a bit softcore compared to Phedre's trilogy, but that is to be expected. Imriel isn't an anguisette, he isn't one of the highest paid courtesans in all the realm.

He is, however, a traitor's son, third in line for the throne, with Kushiel's blood in his veins. His dark history in Darsanga combined with Kushiel's heritage is what I think makes him a character I want to read about.

There are some new characters I grew to love - Eamonn, Mavros, and Alais. I've noticed one feeling which holds strong in all of the novels: no matter where Phedre or Imriel travel, the greatest voyage for me is when they return home. I felt this heavily in Scion, possibly because I was dying to return to Phedre and Joscelin, to see what they were up to while Imriel was away.

Basically, I loved this. Maybe not to the standard I loved Avatar, but definitely in its own right.

I'd wondered if Jacqueline Carey would be writing any more in her Kushiel universe, and was thrilled to find that she's continued in a new trilogy centering on Imriel de la Courcel.